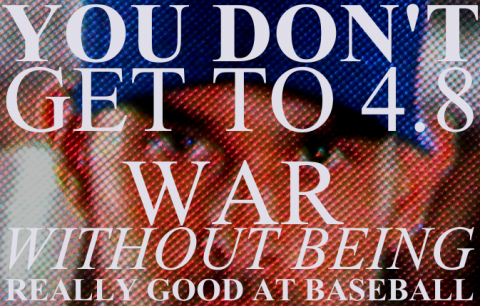 Angel Pagan is not happy.

We are talking by his locker, an hour before the New York Mets will play the Washington Nationals in the penultimate game of both teams’ seasons. I had just asked the Mets outfielder how it felt to have a breakout season on an otherwise disappointing team. Apparently, the answer is “not good.”

“There’s no enjoyment, because the year hasn’t gone well for the team,” Pagan says. He appears solemn about the failed season. “So I can’t be happy about it, because we aren’t playing meaningful games in October. I will look at my numbers after the season so I can set goals for the next year, but only after the season is over. Never during.”

He emphasizes the last point as if being pleased with one’s numbers in-season is punishable by crippling torture. Thinking about it, that may explain what happened to Rod Barajas after May.

Whenever Angel Pagan does finally look at his numbers for 2010, he should see something impressive. In his first full season as a regular, Pagan batted .290 with an OPS of .765, stole 37 bases, scored 80 runs, drove in 69, and recorded 10 outfield assists across all three positions. These are all good numbers, but none are great numbers.

However, by the all-encompassing statistic Wins Above Replacement — which takes fielding, batting, base running, position and playing time into account — Angel Pagan was worth more WAR than any other Mets player. Looking at a more complete picture, Pagan was easily the Mets MVP in 2010. It’s not obvious, but his greatness can only be captured in a wide angle shot.

This is the beauty of “everything” statistics like WAR, WARP, or Win Shares. It make quick comparisons of players-as-a-whole so easy. It’s the perfect measuring stick for someone like Angel Pagan, who does a lot of things well but few things great. Did Angel Pagan’s stolen bases and defense make up for David Wright’s lead in home runs and RBI? Did Pagan contribute more playing every day than Johan Santana did with his pitching? For both questions, WAR says he probably did. That’s what I love about these things — the everything stats give a quick way to eyeball a player’s overall contribution and compare across positions, leagues, and eras.

And I’m not the only one who loves it: WAR has become popular. Just this season, it went from a number buried deep in Fangraphs and BaseballProjections to available on every player’s main page on Baseball-Reference. It was cited weekly in The New York Times sports section. Baseball writers openly use it as a tool for award voting. WAR has entered the mainstream as much as any baseball stat can.

This both excites and scares me. I like that these everything stats have found a wider audience. But I’ve grown somewhat hesitant about their potential overuse. It’s not just that they occasionally appear to be destroying sports arguments, or that they sometimes make “baseball as much fun as doing your taxes.” It’s more that the growing popularity of WAR reflects our time’s obsession with boiling things down to some kind of singularity, and we both lose and gain something in that singularity — this is what excites and scares me.

We do love to see how everything fits together. Right now, hundreds of feet underground, near Geneva, Switzerland, scientists are using the Large Hadron Collider to slam sub-atomic particles into each other with more energy than ever before. This is exactly as nerdy (deep underground!) and awesome (explosions!) as it sounds. They’re looking for evidence of a particle which would complete the standard model of physics, AKA the theory of almost everything. It’s WAR for the universe.

Similarly, just about every American between the ages of thirteen and thirty has willingly agreed to sacrifice some amount of their privacy in order to create an online, six-degrees of Kevin Bacon directory of everyone: Facebook. We’re putting our social selves online to create an all-encompassing formula of us. WAR for people. We love to see how everyone and everything all fits together, be it the universe, people, or baseball.

The desire to connect everything is not a modern phenomena — for all the criticisms and spooky choral versions of Radiohead songs Facebook endures, it’s not all that different conceptually from a phonebook. (Only there are pictures of everyone drunk.) People have always wanted to know what everything is made of, how we’re all connected, and, most importantly, how Ty Cobb’s average and steals compare with Babe Ruth’s home runs. The human need to figure these sorts of things out has always been there; the only difference is that our generation has computers, so we actually can figure it out. Or, at least, we have the ability to figure it out quicker and easier than anyone else before us.

The problem is this: When you can finally boil things down to a single theory, a single profile page, or a single number, you can summarize everything you need to know . . . but you sometimes lose everything you would want to know. Individuality can disappear into the collective. This is why knowing a player’s WAR without any other details is exactly as interesting as just knowing that the Mets defeated the Nationals 7-2 without any other details. The final score of a game tells you everything important, but it also tells you absolutely nothing.

Similarly, WAR tells you what a player did, but not how he did it — and it’s the how that is actually interesting. The how is where the story lives. Saying that Angel Pagan had more WAR than David Wright is not particularly interesting in and of itself, but how Pagan had a better season can be. The speed and fielding, grace and passion are what make Angel Pagan compelling as a baseball player. His smooth catches in the outfield, the extra bases taken — those things are how he became the best player on the 2010 Mets. WAR only serves to measure it all.

It seems that those details, the stories themselves, sometimes get left out in our march towards totality in baseball and life. Figuring out how it all fits together gives us new appreciation for the value of certain things — Angel Pagan’s merits as a baseball player would be impossible to fully appreciate without something like WAR.

Only sometimes we get carried away with it. Player A has this many WAR, Player B has this many, end of story. But all encompassing statistics and theories of everything are not perfect, and they might not ever be. They’re not the entire story. They’re just a part of a much bigger one.

7 responses to “All Together Now”