So my birthday is coming up in a few days. First off, this means this blog is about a year old now — my blog and I almost share a birthday. It’s exciting for all of you, I know.

What this really means, though, is that about a year ago, I received a Mets-related birthday gift from my family … And when I say “family” here, I really mean “Momma Flood,” as I’m pretty sure this was all her. I figure we could all use a break from manager talk, so this post is about that gift.

Okay, a little background information first. Before the 2010 season, Poppa Flood had been experimenting with Mets season tickets, four seats in the upper deck. He had tickets for part of 2007, and then all of 2008 and 2009. Good years, if you remember. As you probably know, if you have season tickets, you are entitled to purchase seats for potential postseason games. If you choose to do so, the tickets for the NLDS, NLCS, and the World Series are mailed to you in mid-to-late-September. If those games aren’t played — and as you might recall, the Mets did not play those games — you can have your money refunded or put towards next season’s tickets.

But what happens to the actual, physical tickets? What can you do with them?

Well, here’s one option. Remember, this is a present I received on my birthday, from the people that love me most. (You can click the images to enlarge): 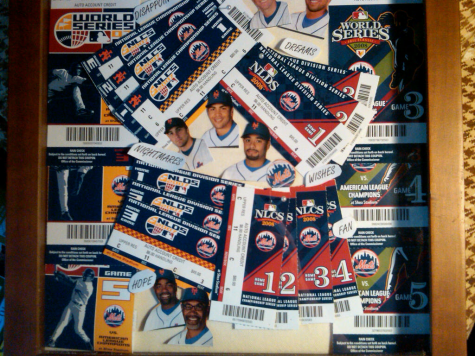 Yup. Those would be framed Mets postseason tickets from 2007 and 2008. Thanks, Mom! Now I can remember those games that weren’t played forever. Willie Randolph was right, that champagne sure would have tasted sweet.

Here’s one close up:

Here you can see Johan Santana, Daniel Murphy, Carlos Delgado, and Jerry Manuel, along with the words “wishes,” “hope,” “fan,” and my personal favorite, “nightmares.”

David Wright, Carlos Beltran, and even Francisco Rodriguez make appearances. I don’t know why the Momma Flood included K-Rod in this fail party, as he had nothing to do with 2007 and 2008. But I think he’s earned his spot by now. Mothers just have intuition about these things, I suppose. Notice that the terms “dreams” and “disappointment” have been added to our word bank.

I still have this, obviously. But that’s not all. Other presents I received last year:

Remember, these all came from my family. I really can’t complain, because over the years I have tormented my four siblings with various gifts. I think I gave my youngest sister a rock from our driveway for her birthday one year. I may have wrapped up and gifted an empty box for my younger brother. I’m sure they’ll be happy to tell you more.

So I probably deserved this.

5 responses to “The Birthday Gift”