The Four Horsemen Will Be Phillies 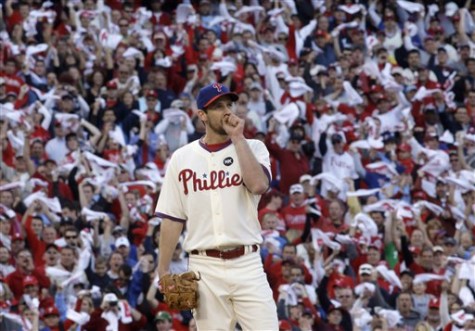 Most of the talk about the Mets’ offseason has involved boring business words like “payroll flexibility,” “fiscal responsibility,” and “being prudent.” It’s gotten to the point that Sandy Alderson could be replaced with Dana Carvey-doing-George Bush Sr. in the middle of a press conference, and it’s likely that no one would notice a difference. “A thousand points of light” and all that.

But that’s the way things have to be for now. Being heavily involved in the market for heavily used pitchers is not the way the new front office wants to operate. It is the way they have to operate, because — as I’ve said before here — it takes longer to clean up messes than it does to make them. The Mets’ biggest addition of the offseason is going to be the new front office itself, which is why we’re currently getting bombarded by the Sandy Alderson media tour to fight insanity. Sandy talks to reporters! Sandy talks to bloggers! Sandy skypes with fans! Sandy talks to the pope! The team is promoting their biggest addition of the offseason: ideas. Meanwhile, quietly off stage, things are getting better … if only because they’re not getting worse.

The reason the Mets need to go digging through the bargain bin this offseason — while distracting us with, and maybe making us all a tiny bit sick of, our dear saberleader’s face — are easily remembered. The team salted their farm system with trades and over-committed on free agents over the past five years: Pedro Martinez, Carlos Beltran, Carlos Delgado, Johan Santana, Francisco Rodriguez, J.J. Putz, Jason Bay, Luis Castillo, Oliver Perez, and so on. The team made these moves because they were going for it all every season from 2006-2010, but doing so over and over isn’t sustainable. The bottom finally fell out this offseason, when it became clear no more talent was emerging from within and they couldn’t afford to add any from the outside. You can only go all in so many times before it blows up in your face.

So here’s the deal: The exact same thing that is happening to these Mets is going to happen to the Phillies, and it’s going to happen soon. Only not yet of course. The 2011 Phillies will be a very good team. The addition of Cliff Lee to Roy Halladay, Roy Oswalt, and Cole Hamels makes for as good of a front four as anyone has seen in a decade, maybe even the best front four ever. When healthy, Chase Utley is still the best second baseman in baseball, and Ryan Howard, Carlos Ruiz, and Shane Victorino provide a solid group of good position players. Ryan Madson and Brad Lidge are still top arms in the bullpen. This should be a good baseball team.

But they are also going to be an old team. With the exception of noted Twihard Hamels and outfielder Domonic Brown, every single important player on the Phillies’ 2011 squad will be 30 years of age or older. They have two rapidly declining players in key roles, Raul Ibanez in left and Jimmy Rollins at shortstop. (Wtiness Rollins’ shrinking OPS from 2007-2010: .875, .786, .719, .694.) They lost their most valuable hitter and right fielder, Jayson Werth, to the Nationals this winter. Behind Lidge and Madson, the bullpen is shaky. This should still be a good team, but they have issues, primarily with age and depth. If Rollins and Ibanez continue to decline, if Brown disappoints, if the bullpen implodes, and if a pitcher gets hurt — and at least one pitcher always gets hurt — things could go really wrong for the Phillies.

But probably not. Have you seen that rotation? They wouldn’t even have to use Hamels in a five game playoff series. It’s not fair.

However — and this is the important part — the Phillies have sold their future to go all in today. Their farm system has been annihilated by the trades for Lee, Halladay, and Oswalt, sparse at the top and filled with toolsy guys (read: no discipline, speed guys) at the lower levels. Ryan Howard, who is not even a the top five first baseman right now, is signed to an inexplicable extension that will pay him $25 million a year through 2016, when he will be 36, with an option for 2017. The Phillies have between $131.5 and $159 million dollars already committed for 2012, and $75 million committed to just four players in 2013, all of them over age 33. By then, everyone on the team will be old, injured, and declining; talent won’t be coming from within, and they won’t be able to afford anyone else. It’s going to look just like these current Mets. The Phillies picked better players than the Mets to make their big bets with, but the team’s future beyond next season starts to look ugly. It’s win now or win never.

That said, for now, it’s exciting to be a Phillies fan. They’re on a run every fan dreams about: four straight division championships, two pennants, and one World Series victory. They appear posed for even more this season. They swoop in as a mystery team (presumably in a Mystery Machine), expand their payroll, and sign the best available pitcher. Baseball, if you can recall, can be fun. And it’s been awhile.  So it’s okay to be jealous. No, really. It is. This is what we all want as fans. Give in to your anger. Let the hate flow through you. Make a Chase Utley voodoo doll, stuff its greasy hair and stupid emotionless face full of pins, and then comment how the lifeless effigy has more personality than the real life Utley. Troll ESPN’s Jayson Stark on Twitter. Look at pictures of Cole Hamels and feel better about yourself, your dog, and the manners in which you choose to transport that dog. Let it all out. You’ll feel better after.

But remember that the cracks are visible. Only the Yankees can function over the long term in this sort of manner, because the Yankees exist in their own universe with special rules — both light and money bend around their gravity. The ever frustrating Phillies are going to win the NL East in 2011. That’s okay. This wasn’t going to be the Mets year anyway. The Amazins will have a good lineup, but hilariously little pitching, no depth anywhere, and no immediate help from the farm. The organization is spent from a poorly planned run at mediocrity, and it takes time to recover from that.

For right now, the Mets don’t have any money, or resources, or new players, or any of those things that translate into immediate success. But they do have a plan now — a real one — and they have ideas — good ones — and these are the sort of things that translate into sustained success. Maybe everyone is sick of hearing about these plans and these ideas and things like “prudence” and “flexibility” and “responsibility.” Every Sandy Alderson speech does sound more and more like a father lecturing an overeager teenager. But that also means the parents are in charge now. Patience everyone: This is the Phillies’ time, but it won’t be forever. It will end, maybe even sooner than you think. Ya gotta believe.

77 responses to “The Four Horsemen Will Be Phillies”