About this time a year ago, the Mets signed a pitching reclamation project, Kelvim Escobar, to a one year incentive laden deal worth a guaranteed $1.25 million dollars. Escobar was coming off two seasons of shoulder troubles — he had thrown just five big league innings between 2008 and 2009 — but had previously been an effective and versatile pitcher, saving 38 games for the 2002 Blue Jays and posting a 130 ERA+ between 2004-07 starting for the L.A. Anaheim Angels of Disney. The stated plan was to use Escobar as a setup man for Francisco Rodriguez, with the hopes that the lighter workload and carefree, idyllic lifestyle of a reliever would protect his fragile shoulder.

Only things didn’t quite work that way. Escobar showed up to spring training unable to throw a baseball — something generally required of pitchers — and failed to pitch a single inning, spring training or otherwise, for the 2010 Mets. (Good news, though: He was cleared to begin throwing again back in November!) There was no return on their $1.25 million dollar investment. 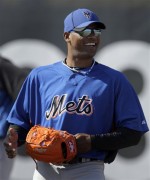 While the Escobar deal failed to pan out as hoped, judging moves solely in hindsight can be misleading. Good moves can fail to lead to good results — and vice versa — but a good move that fails to work out is not equivalent to a bad move. For example: If Albert Pujols agreed to sign a ten year, $10 million dollar deal with the Mets, that would probably be considered a favorable deal for the team. If, however, after finalizing the contract, Pujols was abducted and consumed by Morlocks, the Mets would find themselves with no return on their investment. But the subterranean kidnapping wouldn’t automatically make this fictitious Pujols signing a bad deal. It would instead be a good deal that failed to work out well. So while Escobar failed to pitch an inning for the 2010 Mets, that fact doesn’t automatically make his contract a bad decision.

That being said, there’s good reason to believe that the deals given to Capuano and Buchholz are better baseball decisions than the deal given to Escobar last year.

Capuano and Buchholz, despite their injury histories, have cleaner bills of health than Escobar did. After returning in June of last season, Capuano pitched 66 healthy innings for the Brewers, and 37.2 minor league rehab innings before that, for a total of 103.2 innings. Buchholz threw 33.1 innings in 30 appearances between Triple-A and the majors, spending time on the DL with a back issue, but otherwise remained healthy. Both pitchers finished out the season injury-free, Capuano in particular making seven straight starts to close out the year, posting a 2.37 September ERA.

Escobar, on the other hand, came off the disabled list to make one June start in 2009, before returning to the DL for the remainder of the season.

The types of injuries are also important to consider: Capuano and Buchholz are coming off elbow surgeries, while Escobar was (and still is) coming off shoulder surgery. Elbow injuries seem to be less of a death sentence to pitchers than shoulder problems. For recent Mets examples, Billy Wagner came back from Tommy John surgery at age 37 throwing harder than he had before the operation, while John Maine was never able to recover from his shoulder woes.

Finally, the amount of guaranteed money is important. Envisioned as a reliever, Escobar was guaranteed $1.25 million with up to $3 million in incentives. Had he repeated his best year out of the bullpen, 2002, Escobar would have been worth about $4 million, or approximately how much the Mets would have paid him — meaning the deal’s best case scenario was fair value for the Mets. Capuano is guaranteed $1.5 million plus incentives, but the Mets see him as a starter. If Capuano can repeat his best year, he will be worth far more than the Mets are paying him, about $16 million on the open market. Buchholz, a reliever like Escobar, is guaranteed less than half of Escobar’s deal, $600 thousand dollars. If Buchholz repeats his best season, he will also be worth far more than the Mets are paying him. So while Escobar’s best case was market value, should Capuano or Buchholz even pitch just half the season, they have a good chance of being worth far more than the Mets will be paying for the two.

While the reclamation projects appear similar — formerly injured pitchers signed to incentive-laden contracts — there is evidence that the Sandy Alderson front office has a better idea about how to take these types of risks. Even if Capuano and Buchholz fail to pitch a single inning for the 2011 Mets, their signings are better investments than Escobar’s deal. These aren’t the most exciting deals, but they should be a reason for hope.