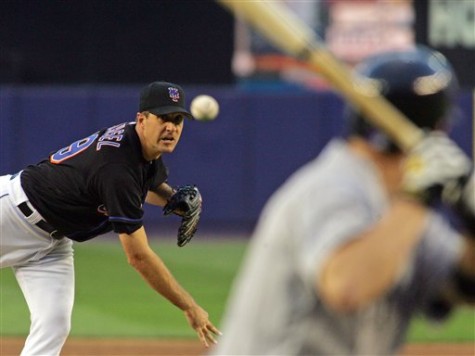 Opening Day 2011 will be the 50th Opening Day in Mets history. To honor that, around here we’ll be counting down the top 50 Mets in team history, one every weekday from now until we’ve done ‘em all. Today, #48, Steve Trachsel:

FIP, standing for “fielding independent pitching,” is a pitching statistic that takes just three numbers — a pitcher’s strikeouts, walks, and home runs allowed — and spits them back out as a number scaled to look like an ERA. The reasoning is that strikeouts, walks, and home runs are events that do not involve fielders; therefore, they should better reflect the skills of the pitcher and not his defense, ballpark, chance, or dragons. It seems counter-intuitive to ignore everything else a pitcher does except those three events — it’s throwing out around 70% of the available information — but if you’re building your fantasy baseball team, a pitcher’s FIP from last year serves as a better predictor for his ERA this year than his actual ERA from last year. So FIP has its uses.

This is the case because most pitcher’s ERAs eventually settle around their FIPs, given enough innings. Someone with a 4.50 career FIP should have a career ERA around 4.50. Picking examples at semi-random, Mike Pelfrey has a 4.31 career ERA and a 4.18 FIP, the Marlins’ Josh Johnson has a 3.10 ERA and a 3.20 FIP, and the Angels’ Ervin Santana has a 4.39 ERA and a 4.32 FIP. The two numbers are generally close, but not always. Some pitchers consistently outperform their FIPs by a wide margin year in and year out. From Fangraphs, these are the five Mets pitchers with the biggest difference between their FIP and ERA over their careers in New York (minimum 500 innings):

2/3 of the AP images of Trachsel have him looking like this.

.
Yeah, I’m not totally sure how Steve Trachsel got himself on this list. The other four are good strikeout pitchers, averaging around 7.5 strikeouts per nine innings pitched with the Mets. On top of that, Santana is and Orosco was a fly ball pitcher, Leiter threw a sawing cutter, and Franco had his sinking screwball/change – there are reasons to suppose those four pitchers were inducing weak contact from hitters. Pitchers who have good strikeout numbers and induce weaker contact can and often do outperform their FIP.

Steve Trachsel, on the other hand, was not a good strikeout pitcher: he averaged 5.5 strikeouts per nine innings, which is below average. He also allowed about 25 home runs a year pitching half his games at Shea Stadium, so it doesn’t seem as if he was the type to be limiting hard contact.

Only that appears to be exactly what he was doing. Five of his six seasons with the Mets, Trachsel’s batting average against on balls in play was lower than his team’s BAbip against:

.
Trachsel was either lucky for five years, the Mets played better defense behind him for five years than they did for everyone else, or he induced balls that were more easily turned into outs. Those .012 don’t seem like big differences, but for a contact pitcher like Trachsel it saves him six hits a season, which shaves about .20 runs off his ERA.

But that still explains away just .20 runs of a .58 run difference between Trachsel’s FIP and ERA. I have no answer for the other .38 runs. A little help from pitcher friendly Shea Stadium here and there, maybe, but that’s not enough. Steve Trachsel’s success with the Mets is a mystery.

And the most losses by a Mets pitcher in the 2000s:

One response to “#48 – Steve Trachsel: The Human Rain Delay”