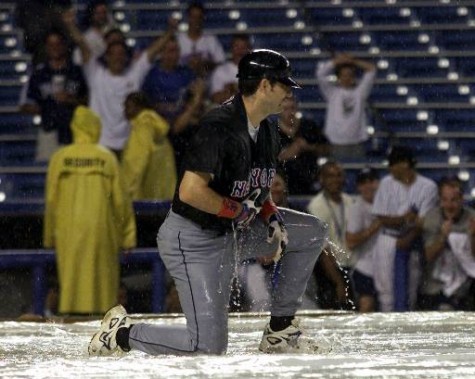 Opening Day 2011 will be the 50th Opening Day in Mets history. To honor that, around here we’ll be counting down the top 50 Mets in team history, one every weekday from now until we’ve done ‘em all. Today, #38, Robin Ventura:

My favorite memory of the 2000 Mets is Robin Ventura sliding around on the tarp at Yankee Stadium, doing a dead on impersonation of Mike Piazza after long rain delay:

“Minutes after the game was postponed, Ventura ambled out of the third-base dugout, wearing Piazza’s No. 31 jersey stuffed with towels. Ventura had used eye-black to create a Piazza-style Fu Manchu, and as the rest of the Mets hung on the dugout railing, Ventura went to work.

He let a phantom pitch go by, then called time, gesturing dramatically with his right hand. He took a mighty hack and sprinted around first before splashing into second. Ventura called time again and raced for home, where he slid and splashed some more.”

Despite being among my favorite Mets, Ventura is hurt in these rankings by three things: 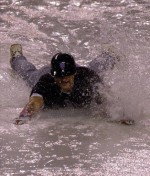 3. Despite hitting one of the greatest postseason home runs singles in Mets history, Ventura did not hit his best in the postseason, putting up a .161/.299/.287 line in 107 plate appearances between 1999 and 2000. Even if you correct for that grand slam single being an actual home run, his OPS jumps from .586 to just .620. He did draw 17 walks against just 13 strikeouts, so his struggles might have been just a fluke luck thing, but it still happened and still counts against him.