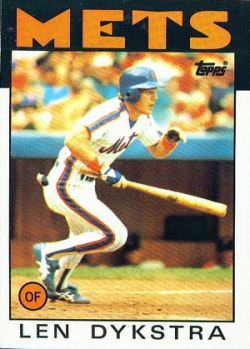 Opening Day 2011 will be the 50th Opening Day in Mets history. To honor that, around here we’ll be counting down the top 50 Mets in team history, one every weekday from now until we’ve done ‘em all. Today, #25, Lenny Dykstra:

At this point, everyone is familiar with the mythology that has grown around the 1986 World Champion Mets. They were the bad guys, the nastiest team in history. They were fightin’ and drinkin’ each and every night, involved in any sort of illicit activity imaginable, hated by everyone outside of the New York area. This reputation has managed to both grow and softened with time; the ’86 Mets have now become the sort of thing we make into animatronic pirate rides at Disney Land. We know they were wild and dangerous, but there is such an allure of freedom to it all . . . such that the worst parts are often repressed or turned into harmless cartoons. Yo ho, me mateys.

But this reputation may be somewhat undeserved. What some may not know is that the 1986 Mets were also the most impressively literary team in baseball history. Seven members of those wild Mets authored books, six of these noted authors releasing works between 1986 and 1991. Trapped inside these mustachioed rascallion ballplayers were the tortured souls of poets, searching for freedom in the Byzantine whimsy of both the game and the verse. Wilde, Plath, Frost, Dykstra: all sought release in the written word. The poets of Flushing fought and drank, sure, but so did Hemingway. And maybe Lenny Dykstra has claimed on multiple occasions to hate reading. But who hasn’t?

So let’s play a game. Match the book title with its respective ’86 Mets author (and co-author, of course). All these books were written in late ’80s. First one is a gimme:

Answers below this terrifying file photo of Dykstra: 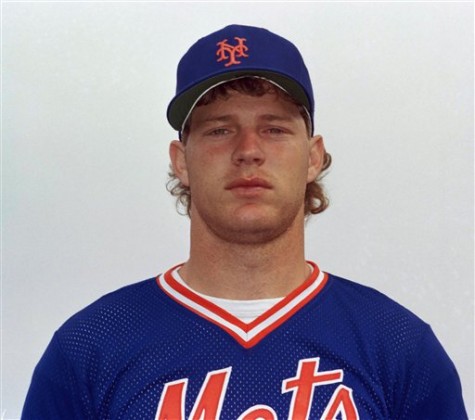