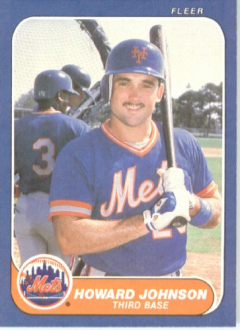 Opening Day 2011 will be the 50th Opening Day in Mets history. To honor that, around here we’ll be counting down the top 50 Mets in team history, one every weekday from now until we’ve done ‘em all. Today, #13, Howard Johnson:

Third place on the franchise leaderboards in home runs, doubles, walks, and stolen bases, Howard Johnson is the Mets’ most varied offensive talent. A switch hitter, he hit 36, 36, and 38 home runs in a season, stole over 30 bases five times (registering three 30/30 seasons in the process), scored over 100 runs twice, and drove in over 100 runs twice. Outside of maintaining a high batting average — which he compensated for by maintaining a luxurious mustache — there was little offensively Howard Johnson couldn’t do. If this list were based solely on offensive contributions, Johnson would be in the top ten. If it were based on funny names, he’d be in the top one.

But defense counts, and Johnson is one of the worst fielders in Mets history. He rates terribly by both traditional and modern fielding metrics. He “fielded” .929 as a third base when the league average was .949. The team would stick him at shortstop on occasion, mostly for the sake of morbid curiosity: He fielded .951 at short when the league fielded .966. The team started putting him in the outfield, but he was terrible there too. In 1991, moving between third, short, and right field, he made 31 errors, giving him what I think is the only 30/30/30 season in history. Spy magazine reportedly commented, “The Mets will have 21 giveaway dates this season, not counting games Howard Johnson starts at third base.”

For some reason, the team decided the proper response to those defensive struggles was to try him out in center field in 1992; Total Zone estimates that Johnson cost the team 25 runs in just 84 games. So that didn’t go so well.

Overall, he cost the Mets a franchise record 81 runs in the field over his career. The next worst offender, Mike Piazza, cost the Mets only 51. Inning for inning, Johnson is not the worst defensive player in Mets history — that would be Rickey Henderson — and not even the worst third baseman — that would be Wiggy. Howard Johnson is just cumulatively the worst, and managed to reduce his value almost 25% with his terrible fielding.

In 1987, Johnson became a full time player and hit 36 home runs. He was accused by Cardinals manager Whitey Herzog of using a corked bat.

“The Mets’ next stop was Montreal, where manager Buck Rodgers also accused Johnson of using a doctored bat. On the last day of the series, McDowell, the Mets’ designated comic, taped several wine corks to one of Johnson’s bats and left it, in the locker Johnson had used, for the next visiting club to find. Yes, the club was the Cardinals. Right, Herzog was not amused.”

”All I’ve ever said is that when they X-rayed my bats, they came up clean,” he said.

Did he have any special friends? ”I know a few good carpenters, yeah,” Johnson said, smiling broadly.

“I do know that HoJo was corking his bat,” [Keith] Hernandez said on TV during Game 1 of the Mets-Brewers doubleheader. “His father corked his bats for him. . . . Howard did it kind of later in his career.”

I’ll note that both Yale physics professor Robert K. Adair, in his book “The Physics of Baseball,” and the even more prestigious guys on Mythbusters, have both independently determined that corking a bat has little to no physical effect on the flight of a batted baseball. It may even have a negative effect. Basically, the soft cork absorbs some of the force of contact, reducing the flight distance of the ball. The cork center does make a lighter bat, allowing it to be swung faster and more accurately, which is advantageous . . . but one could just as easily use a lighter, legal bat. So there’s that.